Dhar is one of the ancient cities located in Malwa region of Madhya Pradesh. Like its historical old ramparts, places and monuments, Dhar is too famous for its delicious cuisines. Traditional food of Dhar is influenced by Rajasthani, Maharastrian and Gujarati cuisines. Most of the part of Dhar district is occupied by tribes. Thus, people still follow traditional food habits of tribal communities. Veg and non-veg both types of cuisines are popular in this region.

Staple food of Dhar comprises of chapatti, rice, lentils, green leafy vegetables, raw onions and red ground chilies. ‘Dal Pania’ is famous local dish of this tribal dotted region. While fish is much popular among non-vegetarians people of this region and is main part of their daily diet. Another famous non-veg cuisine of Dhar is ‘Kalamasi’, which is much favored for its unique taste among locals and visitors as well. However, fast food has also become a major part of people’s daily food in this city. A number of restaurants are also present to serve foodies in this city.

Traditional food of Dhar is that of Malwa region and it has touch of Rajasthani, Gujarati and Maharastrian dishes. ‘Dal Pania’ is famous traditional cuisine of this region. It is just like Rajasthani cuisine, ‘Daal Baati’ or ‘Dal Bafla’ but it is made of wheat flour in form of small round balls cooked or roasted in a traditional way over dung cakes and is usually eaten with daal. ‘Bhutta ri Kees’, which is made of grated corn roasting in ghee and then cooking in milk with spices is another most popular cuisine of Malwa region and Dhar as well. Being a tribal dotted region, Dhar has a food pattern comprising all those food items which are locally available and grown on large scale in this district. Junglikhand, mokha leaves, vasarta, teruna leaves and doli mahuda seeds are popular food items among tribal community of this region. Rice, chappati, lentils, pulses, vegetables, raw onions and red ground chilly are mostly consumed in daily diet. Green leafy vegetables are generally consumed during monsoons and many food items including wild roots and tubers such as junglikhand, vasarat etc. are collected from forests of the region during winter.

‘Mahua’ is famous traditional drink or liquor which is popular among tribal people in this region. Men and women both enjoy this local drink and it is special part of their lives. Even every special occasion is enjoyed with this drink by tribal people of this district. Rice is most common food which is cooked in households of Dhar. Apart from that chapatti is also major part of staple food of this district. Earlier, maize was consumed on large scale but it got replaced by wheat later. Ragi cereal is also consumed on large scale by lower class of the tribal community. Non-veg food includes fish and animal foods which is quite popular among non-vegetarian residents in this part of Madhya Pradesh. In fruits, many varieties of berries are quite popular among locals due to easily availability of these fruits in the region. Mango is too famous among residents as a summer delight.

Like any other part of the country, Dhar too has numbers of people who love to enjoy traditional sweet dishes. ‘Tapu’, is a kind of sweet dish which is made during festivals especially. Malpua, mawa-bati, khoprapak and shreekhand etc. are other local sweet dishes of the region which are popular among locals and tourists for their mouthwatering taste. A number of local sweet shops in Dhar are present to cater all the sweet lovers in the city of Dhar.


Snacks and Fast Food in Dhar

There is no doubt that snacks are the all time favourite food items of people everywhere. In recent years, fast food consumption has increased rapidly in every part of the world and Dhar is not an exception too. People love enjoying snacks and fast food in Dhar. It could be the reason why a number of snacks corner and fast food joints and restaurants are present in this city to serve foodies, especially all the diehard fast food lovers. Madhur Milan Sweets, New Jaiswal Restaurant, Ritika Restaurant, Shivalik Corner, Keshav Café and Relax Point are some of the famous fast food restaurants in Dhar. 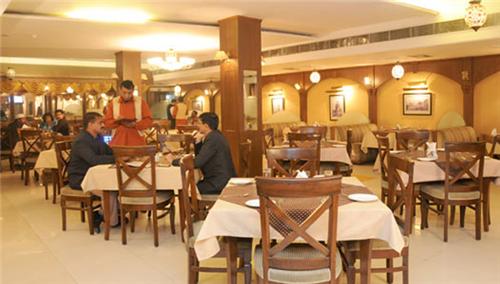 Thus, Dhar is rich in delicious and delectable food as traditional food to fast food almost every type of mouthwatering cuisine is available in this city. Sweet dishes and desserts are also hit among the locals and visitors for its sweetness. Besides, due to presence of numerous famous restaurants in Dhar, there is no dearth of lip smacking and mouthwatering cuisines in this part of Madhya Pradesh.

Comments / Discussion Board - Cuisines of Dhar