Art and Culture of Dhar

Dhar is a historical city, ruled by many of famous Hindu and Muslim rulers. Thus, impact of various cultures is visible in every part of this ancient town of Madhya Pradesh. Since ancient times, Dhar has been a culturally rich part of Malwa region. Literature, dance, music, painting, sculpture and several other art forms are an integral part of this city’s past and present. Traditional art and craft of Dhar has got recognition on national and international both levels. Bagh prints, Pithora paintings, leather and metal articles, beadwork are some of the finest examples of unique art and craft of this part of Madhya Pradesh. Since Dhar is a tribal dotted region, folk songs and dances are also common part of people’s lives in this region. 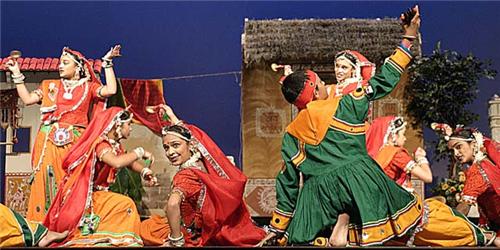 Folk Songs and Dances of Dhar

Since ancient times, Dhar has been a center of art and culture development. It is also said that during middle of 16th century, music got major attention and developed attaining perfection in entire region of Malwa. Dhar has got a rich heritage of Indian literature, music, dance, painting and sculpture. Baaz Bahadur, famous ruler of this region, contributed a lot in encouraging and art and culture. His attachment to Rani Roopmati became source of inspiration for music and songs in this region. After long time, still famous love story of Baaz Bahadur and his beloved, Roopmati inspire young generation of Dhar. Many of the famous folk songs are based upon Baaz Bahadur and Roopmati. Community bhajan singing is part of traditional music in rural areas of this district. Usually, people gather in villages on the chaupals in night and traditional bhajans and songs are sung with the accompaniment of various musical instruments including harmonium (peti), tabla, dholak, manjire, thali, mridang, mandal, kundi, payli, zanch, and dhak etc. Folk dances are also popular among locals and enjoyed with lot of amusement.

Dhar is home to people from various religions and communities that make it culturally diverse. Hinduism, Islam, Sikhism, Buddhism, Jainism and Christianity are the main religions in this district. Besides, a major part of population consists of tribal communities. Bhils and Bhilals are the main tribes in this district. Being a city having residents from various cultural backgrounds and communities, Dhar is also rich in terms of languages. Hindi is the official language as well as language of local communication in this part of Madhya Pradesh. Urdu, Marwari, Gujarati, Nimadi, Malvi and Marathi are other languages spoken in this region.

Due to presence of people from various communities and religions, a number of festivals are celebrated in district of Dhar. Holi, Diwali, Dusshera, Vasant Panchami, Maha Shivaratri, Ramnavmi, Janmashtami, Raksha-Bandhan, Nag-Panchmi, Ganesh Chaturthi, Anant Chaturdashi, Sarva Pitri Amavsya, Dol Gyaras, Hanuman Jayanti are some of the Hindu festivals celebrated with much fervor in this district. Besides, Shradha Paksha (fortnight) is also celebrated from Bhadra Poornima to Kunwar Amavasya by Hindus with much devotion. 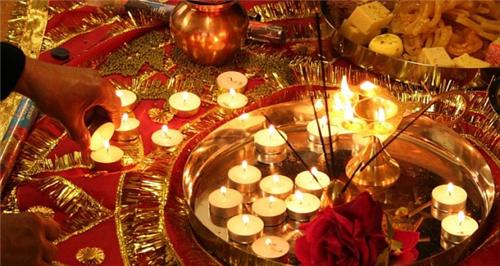 Along with Muharram, Id and Miladunabi are among popular festivals celebrated by Muslim community in this region with great enthusiasm. Christmas and Good Friday are main festivals celebrated in Dhar by Christians. Mahavir Jayanti and Paryooshan are popular among Jains. Regionally, in few particular castes, Radeoji and Tejaji Jayantis are celebrated with katha and puja annually. However, dates and traditions of these pujas vary as per tehsils. Thus, Dhar has a long list of festivals which are celebrated with fun and frolic by all communities.


Art and Craft of Dhar

Unique art and craft of Dhar has acclaimed attention from all the art lovers. People of this region have been engaged in various forms of fine arts. In fact, historical monuments, temples caves of this region also showcase their exclusive work of painting and sculpture. Artisans of this region are expert in traditional art and craft which include beautiful bagh prints, beadwork, gatha stones, stone jalis, pithora paintings, teak woodwork, leather and metal articles etc. Paintings of Bagh Caves are fine examples of ancient art of this region which depicts music and dance of that time and nature in form of beautiful paintings. However, most of the paintings have ruined now but still few are remained. A number of historical buildings, forts, temples and mosques are present in and around Dhar to tell story of finesse of art and attachment of people with art at that time in this region.

When it comes to delicious food, Dhar has a variety of cuisines to offer to its visitors. Food of this city has impact of Gujarati, Rajasthani and Maharashtrian cuisines. ‘Dal Pania’ is famous traditional cuisine of this region. Since Dhar is a tribal dominant district, food habits of people are generally traditional and wild roots and tubes are mostly consumed in tribal communities. Rice, chapatti, lentils, vegetables, raw onions and red ground chilly are popular food items consumed as daily food. Fish is famous among non-vegetarians in the district. Sweets and snacks are much popular among residents. Tapu, malpua, khoprapak, mawa-bati and shreekhand are some of the famous traditional sweets of Dhar. Mahua is famous local drink which is mostly popular in tribal community of the region.

Dhar lies in Malwa plateau and thus, traditional costume of Dhar is that of Malwa region. Traditional costume of women is lehenga and choli. Orni is worn over head covering shoulder area. Red and black are prominent colours used for dresses of women. In city area, women put on saree and girls put on salwar-kameez and churidar as well. Tribal women put on kathir and silver ornaments with traditional dresses and girls love to flaunt payal or pajeb. Traditional costumes of men include dhoti and safa or turban with black or white jacket called, Mirzai or Bandi. In tribal areas, men usually put on short dhoti. In city, men generally put on shirt, trouser, t-shirt and jeans. Like any other part of the country, youth of Dhar too is experimenting with costumes and trying hands on new fashion trends. Tattoo designing is also popular among tribal people of this region. They love to draw tattoo of their names and pictures of gods on their arms.

Comments / Discussion Board - Art and Culture of Dhar